Warning: Lots of self indulgent, climbing specific, spray ahead. But it's (still) mid Covid, so being stoked about anything is a good thing, right? Bueller?

I won't judge you for skipping this one; I'm just basking in my own greatness for 2000 words. With a little bit of self reflection mixed in. But just a little.

2019 was a good year. I climbed a lot, and I like climbing. Most importantly, at the beginning of 2020, I still liked climbing.

98 days of outdoor climbing feels like an insane amount. This number includes just an hour of traversing at Morrison, getting benighted because a rattlesnake blocked the quick way back to the car after a post-work climbing session on North Table Mountain, bouldering until our floodlights died on a frigid winter evening at the Black Hole (several times!), feeling a swollen Clear Creek's spray on a sagging tyrolean on the way to Primo Wall, thigh-deep wading through that same snowmelt to climb at New Economy Cliff, biking and hiking two+ miles at 9,000' to punt off the same climb sixteen times in Staunton State Park, limestone pocket pulling and water sliding for five days in the Lander summer heat, and reuniting with distant friends in the first world refugee camp that is Miguel's at the Red River Gorge. This is fun, and it's not getting old.

I climbed with lots of people. A good chunk of that climbing was sport climbing. And that requires a partner in crime.

I don't know if I expressed this to Lisa/my climbing partners/others often or frequently enough: but I am so thankful for every one of those days outside. A bad afternoon climbing outside is still better than a good day stuck indoors. I'm super thankful I was able to climb with so many stoked (and sometimes not stoked) partners too (in the order of who I think I climbed with the most): Lisa, Eddie, Jason, Leon, Will and Mackenzie, Chris, Duane, Dustin, Isaac, David, Dave-O, Greg, Doug, Albert, Zach.... and everybody else who I met but didn't include on this list.

I also progressed an insane amount. In 2019, I somewhat accidentally climbed my first 5.12c*, first 5.12d, and my first 5.13a. As--I didn't train. I didn't follow 12-week Rock Climber's Training Manual (RCTM), like I did for three+ cycles back in DC. (Side note: I think the RCTM is an awesome program: I made the most progress I had ever made climbing (until 2019) following that plan. But I did all that training solo, and training by yourself for that long is hard. Full stop.). I did it by trying to get out climbing as much as possible. By finding (generally) stoked partners, and getting after it. I say "accidentally" because I did not set out to climb 5.13a or 5.12d at the beginning of the year; I set out to climb a lot. I did, I got lucky, and I crushed.

It's left me feeling like somewhat of a fraud. I feel like I should have written goals, I should have had a process, I should have followed that process, I should have had failures, I should have had successes, and that should have all been a part of my plan. I feel guilty that I didn't put in the training mileage that I feel like I should have. Climbing Psycho Wrangler (probably the 5.12a I'm most proud of) in 2016 epitomized that process. Back when I couldn't send 5.11s in the gym, I tried it only because Joe's was stoked, and, to quote Joe, "it's got permadraws, why not?" Scared out of my mind (six feet above my last bolt) and pumped out of my mind trying to reach the second to last clip, I took the massive whipper, and bailed two bolts from the top. I had bolt-bolted the route, but safety (the next bolt) was ten feet of committing moves too far away. Months--really, years--later, if I wanted to get my heart racing, I'd think about that moment on that climb. Like a siren, it beckoned me back, and two years later, I was in that same position. This time I made it to the third bolt... and then rested/hung at every remaining draw. But this time I made it all the way to the top. This was doable. Inspired by David's goal setting philosophy, I set Dave-O's photo of the climb as my work computer's desktop wallpaper. I followed the beginner's RCTM plan to the best of my abilities for three three+ month cycles (although I only made it though a couple of linked bouldering circuits each time). I said no to outdoor climbing so I didn't skip a session, I avoided friends at the gym to punish myself with hang board repeaters, and I ARCed when the gym opened at 6:00 AM because that was the only time the gym was empty enough to traverse the leads walls. In September 2016, I sent. First go. It wasn't easy, but it wasn't impossible... and I felt strong. I felt confident. I felt like I deserved that climb.

On Happy Endings, my first 5.13a, I did none of that. I picked it because it was the only 13a without a line on it every weekend at the Dungeon. I worked it for a couple weekends, burnt out, didn't go back for a month (just climbed hard in the gym, went hiking, and went biking), went back twice in one weekend (a Friday and a Sunday), and sent on my third go that Sunday. I did none of the homework, but aced the exam.... on my seventeenth try.

In the end, I don't think it matters. Sport climbing is a game. I wanted to play, and I wanted to improve. I did both. And it sure was fun.

Some parting thoughts/highlights of the season: 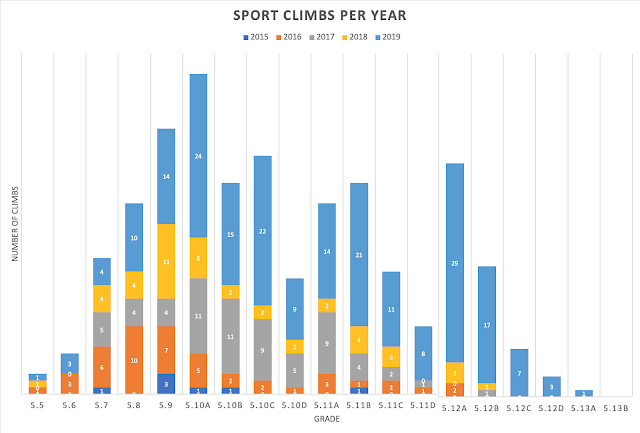 * I believe the way I climbed Reckless Abandon (the rad way) is probably 5.12c. A quick diversion: there are at least three different ways of doing the crux. The first way (probably the most common) is going slightly left and using some bad underclings and sharp crimps to get over a bulge. This is 5.12a/b. The second, and probably the worst way, involves traversing far, far left, completely off route, doing some easy moves, and then traversing back in. Don't cheat yourself. Don't do it this way. It sucks, and I've never tried it. The original way, which is no longer possible, trended slightly right, and used a good hold to get to a perfect four finger, one pad edge. The good hold broke long before I tried this method, but I've heard it was about 5.12a. The fourth way (the rad way) follows the original line: crossing into what's left of the good hold (now a cool, but poor vertical, left hand crimp/pinch), getting your feet up, and then uncoiling/throwing with the right hand to the perfect four finger, one pad edge. This move feels awesome, is slightly contrived, is definitely lower percentage, and is definitely harder than the other methods. I feel like this makes the climb 5.12c-ish... but I had never climbed 5.12c at the time. Having now climbed a handful of 5.12cs now, I'm super curious how they all compare. Also, this is a beautiful climb with a beautiful position: you climb impeccable bullet white stone with hypnotizing red iron swirls directly above Summersville Lake. If you're in the area, get on it! You won't be disappointed.

Popular posts from this blog

I made it out Gretna for a short, hot and humid Bouldering Session Sunday afternoon. Not exactly ideal Pennsylvania Bouldering conditions, but I was out pulling on real rock, so I can't complain. Even though I was only out for ~4ish hours, I'm pretty stoked about a pseudo-project that I finally sent. Thankfully (sort of), gravity does still work, because I haven't sent any of my hard projects yet. Here's a quick recap of the high and low lights. The updated Mt Gretna Bouldering Guidebook that was supposed to be in stock by January (last time I went there)? Not out yet. I'm not complaining, because there's a lot of hard work that goes into making the guidebook, and I really appreciate the guys who do it. Ok, I'm complaining a little. But only because I'm stoked. I hopped back on the delicate, slabby,  Scarlet Lady --a problem I sent the first time I visited Gretna for the Bouldering competition--and bailed right on slightly scary high-ballish moves on
Read more

Aspen Adventures: To the Castle!

Picking up where things got interesting from my August 3rd-August 13th Colorado/Vegas Vacation... We set off to Aspen in an Budget rental car, with some good luck Chipotle burritos (they've got them in DC, but not Kosovo), $200 worth of REI gear (including the new  Colorado's Fourteeners, 3rd Edition  book), and egos significantly bigger than the 14ers we were planning on climbing. We were in a $370 Budget rental car, not my little brother's unused car or one my parents cars because my parents don't trust dirt roads. Nor, as we would later find find out, does Shane's Audi. This posed quite the predicament, because rental car companies don't either. If you're counting, that is exactly zero off-road vehicles. But to access two trailheads, we were going to need one. Half an hour out of Boulder we found our solution:  Eagle Car Rentals , or, as I like to call them, Awesome Eagle Jeep Rentals. If we made it to Aspen before 5:00, we'd be able to rent a j
Read more